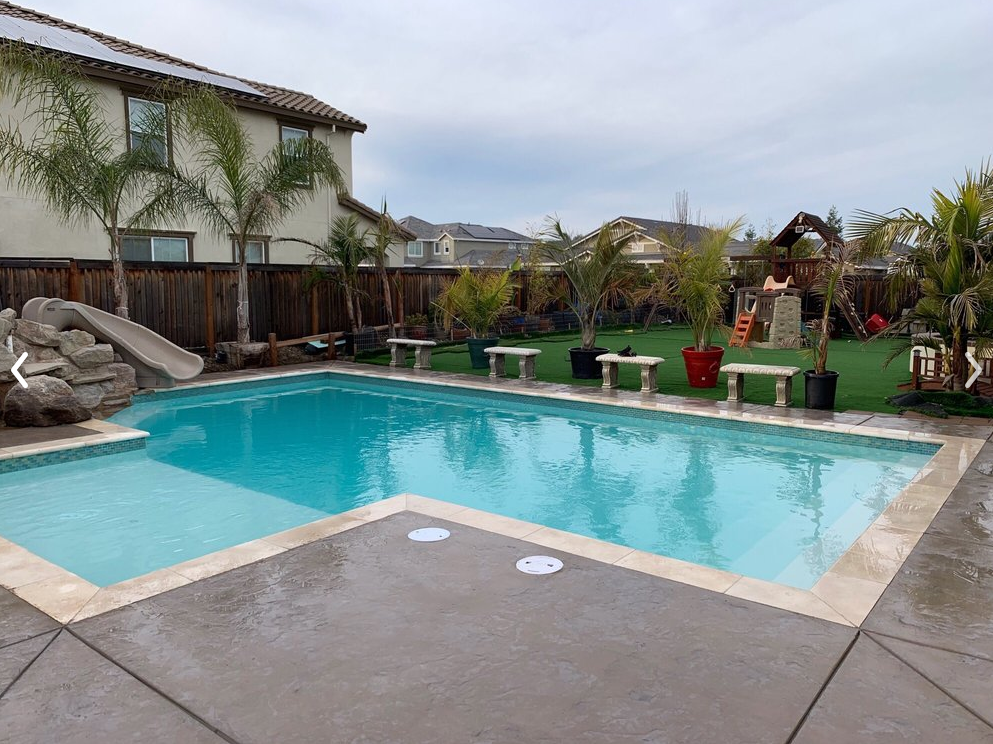 Our pools are our go-to spot to chill and enjoy a cheat day. We invest a great lot of time, money, and resources to get the perfect pool experience. But unfortunately, the deck around the pool area often goes unnoticed. But considering how important a role it plays in providing a pleasant pool day experience, we really need to treat the surface better.

From cooking to resting to playing games, a deck is a busy place. But, the problem arises when the surface becomes unbearably hot, especially during summer. An unusually warm pool deck dampens the entire fun of the day. Kids can’t run about, adults can’t rest, and walking over the surface becomes a task. That’s why it’s very, very important to invest in a product that will keep your pool area cooler. And this is where cool decks come into the picture. Designed specifically for this purpose, a cool deck keeps your pool deck cooler than the average acrylic surface. And when it comes to choosing a pool deck, nothing beats the kool deck.

What Is The Difference Between Cool Deck and Kool Deck?

Even though cool deck and kool deck almost carry the identical pronunciation, the two things could not have been more different. They are often used interchangeably, but there are two important points that separate the two.

The cool deck is the umbrella term used to describe the special pool decks that are manufactured to keep the surface temperature of the pool deck from rising too much. But the kool deck is one specific product trademarked by a company in Tustin, the USA back in the early 70s. And this is the original cool deck. The widespread use of kool decks gave rise to the trend of manufacturing other cool decks. The key area that differentiates the two is the performance. Kool Deck is the first cool deck, and the rest of the cool decks are newer products that are often inferior in terms of functionality. If you need to know more about these products, just give us a call in (949) 635-7090.

What Makes Kool Decks the Best?

Kool deck has the advantage of setting the market of cool decks rolling, but it also consolidated its position by performing excellently when it comes to keeping the pool decks cooler than the rest.

First of all, the kool deck’s effectiveness is unparalleled. It conveniently transfers the heat from the surface of the deck to the bottom so that walking on it doesn’t become an issue. Apart from that, the kool deck protects the concrete as well. It actively endures the thermal contraction and expansion during cold weather and in excessively hot days. It protects the substrate and lets the concrete breath. It’s durable and functions excellently.

And at the same time, it also looks great. With a kool deck, you will get a sophisticated surface, and you can even recreate the looks of exotic rocks. With it, you don’t need any extra matte or glossy surface. On top of that, it is really low on maintenance. Keeping all these things in mind, the kool deck becomes a no-brainer.

Your pool area is an important part of the whole outdoor experience. The way you wouldn’t want to get a cheap job done on your pool; similarly, you wouldn’t want to ruin your pool deck with inexperienced work. Self-reliant methods will not be the best choice going forward because installing a pool deck is quite an intricate task. We, at Laguna Niguel Pro Concrete, are always aiming to provide you with the best professionals who have the necessary knowledge and experience of the job so that you can always get a flawless pool deck installation. To know more about us, just give us a call in (949) 635-7090.